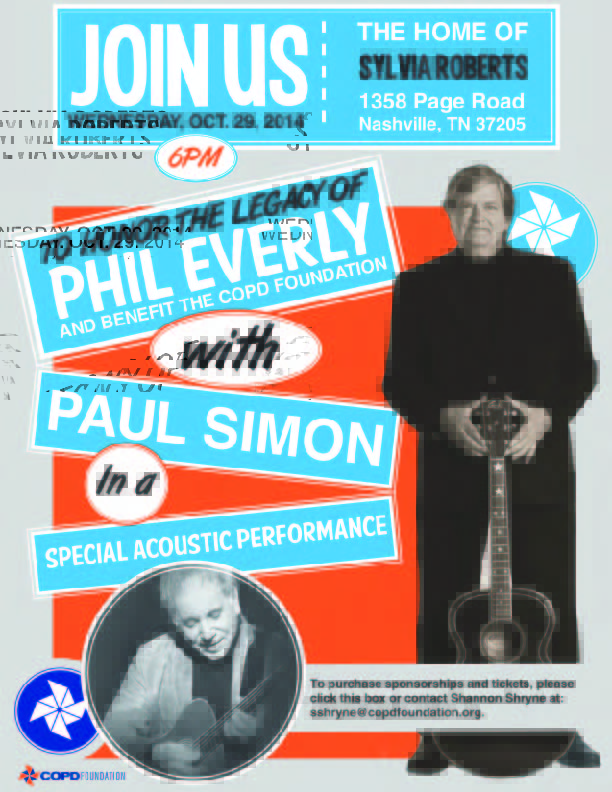 “A Tribute to Phil Everly” benefit concert will be held on Wednesday, October 29, 2014 from 6 p.m. – 9 p.m., at the home of Sylvia Roberts in Nashville, Tennessee — an event being promoted by The COPD Foundation. COPD is a nonprofit organization committed to cure chronic obstructive pulmonary disease (COPD). The event, according to a COPD Foundation press release, will feature Paul Simon, a 12-time Grammy winner, in honor of Phil Everly, who passed away in 2014 because of COPD complications. Read more about sponsorship and tickets.

Phil Everly and his brother Don formed the Everly Brothers ,who influenced countless solo artists and bands such as the Beatles, the Hollies, Simon and Garfunkel, and Paul Simon himself, who confessed, “I wish I’d have met him earlier. He was such a good friend,” as quoted in the press release.

Mrs. Patti Everly, wife of the late singer, added that, “In addition to being a gifted singer, musician and songwriter, Phil was also an amazing husband, dedicated father, grandfather and uncle. COPD took Phil too early. Phil’s music changed our world, and now it’s time to get behind the COPD Foundation and change the world again where no one has to live with COPD. (…) I am grateful for the support of Paul Simon in helping to raise awareness about this devastating disease and to be a part of this special evening with proceeds going towards the COPD Foundation.”

All the proceeds support the COPD Foundation to boost their battle against this disease, the third leading cause of death in the United States that affects more than 24 million Americans. Despite its incidence, there is very little funding to support research in this field and to prevent it. The COPD Foundation works hard to advance knowledge regarding the disease and provides services to the COPD community. The Foundation is now celebrating its 10th anniversary with a remarkable and needful initiative towards chronic obstructive pulmonary disease.