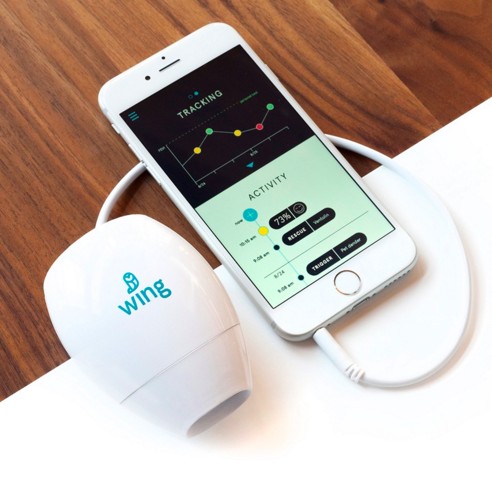 St. Louis, Missouri based digital health startup Sparo Labs is launching an Indiegogo campaign on October 20 with the objective of raising $50,000 in 30 days to accelerate development of its Wing device and app for people with asthma and to help spread awareness about the impact of asthma, which afflicts some 30 million people in the U.S. Asthma is the number one cause of ER visits, hospitalizations and missed days of school in children, even though nearly all ER visits, resulting hospitalizations, and even deaths due to asthma attacks are preventable.

Sparo’s Wing is a pocket-sized sensor with supporting smartphone app that measures lung function with what Sparo describes as “medical-grade” accuracy.

By plugging the Wing’s smartphone-powered sensor into a phone’s headphone jack of and launching the Wing app, the user can measure their lung function by blowing into the sensor. Wing provides more than just a number, with instant results being explained according to a green/yellow/red “stoplight” zone system. This system provides a clear description of the user’s lung condition and can detect declines in lung function early, enabling the right action to be taken at the right time to help prevent asthma attacks. “The more you use Wing, the smarter and more personalized Wing becomes to help you stay one step ahead of your asthma,” says Sparo co-founder Abby Cohen. “Wing not only helps you better understand and proactively manage your asthma on a day-to-day basis, but also allows you to work with your doctor to determine how to avoid things that trigger your asthma and find a treatment plan that keeps you breathing your best.”

Wing is a personalized solution that empowers patients to better understand their asthma through real-time data — a proactive approach enables them to prevent asthma attacks by maintaining consistent control. Because everyone’s asthma is unique, with each person’s lungs affected by different things in ways specific to them, the Wing app automatically stores and tracks lung function measurements over time, and also allows users to track two categories of factors that affect their lungs: ie: medications and triggers (e.g. weather, pollen, exercise, etc.). Wing users can visualize these factors with their lung function, share a report of their data with their doctor and see asthma control improve over time.

Sparo notes that besides helping those with asthma, people with other respiratory conditions, such as COPD or cystic fibrosis, can also benefit from using Wing. Anyone interested in better understanding their lung function, including athletes or even wind musicians can also use Wing to measure and track their lungs.

Wing is currently compatible with Apple’s iOS 8 and later, with an Android app in development. Sparo Labs has submitted a 510(k) FDA application for Wing and is currently pending FDA clearance.

Indiegogo backers will be able to contribute $99 (33% off retail price) to Wing’s Indiegogo campaign, starting on October 20, and in return, contributors will be first to receive their Wing once the device it is cleared by the FDA. For more information about Wing and exclusive details about the campaign, visit: Sparo Labs was founded three years ago by then-students at Washington University in St. Louis Andrew Brimer and Abby Cohen, and the Sparo team has won 10 of 12 engineering, healthcare and business competitions, totaling $273,000 in grant funding. Sparo Labs was also recently selected to exhibit at the first-ever White House Demo Day. In 2014, Sparo Labs raised a $1.3M seed round of funding, and is currently preparing for an Indiegogo campaign.