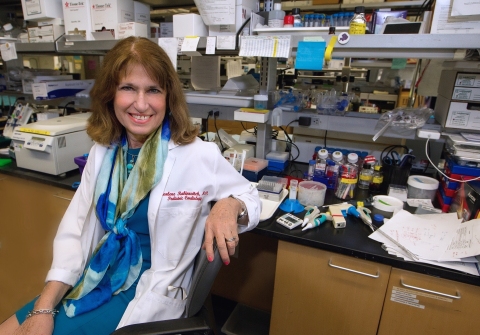 At the American Thoracic Society’s annual meeting in San Francisco in May, Dr. Marlene Rabinovitch of the Lucile Packard Children’s Hospital Stanford will give the J. Burns Amberson Lecture. The lecture recognizes “a career of major lifetime contributions to pulmonary research and/or clinical practice.”

Rabinovitch, a pediatric cardiologist at Stanford Children’s Health and the Dwight and Vera Dunlevie Professor of Pediatric Cardiology at the Stanford University School of Medicine, is being recognized for her contributions in the field of the pathogenesis and management of pulmonary hypertension and congenital heart disease.

The Amberson Lecture is awarded in honor of J. Burns Amberson, an international authority on chest disease and tuberculosis.

The director of the Stanford Cardiovascular Institute, Dr. Joseph Wu, M.D., Ph.D., was one of 10 national and international experts that nominated Rabinovitch. “We’re ecstatic that Dr. Rabinovitch is receiving this much-deserved award,” Wu said in a press release. “It’s a fitting salute to her extraordinary career of achievement and overall contributions to the field of pulmonary medicine.”

Rabinovitch, a longtime member of the American Thoracic Society, said the award “is truly an overwhelming honor.”

“I share this with all the young scientists who have worked so hard in our laboratory and with colleagues whose work has both challenged and inspired us,” she said. “In addition, I am thankful for the collaborating basic scientists who have facilitated our ability to apply cutting-edge methodology and have been generous in helping us interpret our results, and with clinical scientists who are bringing our discoveries to clinical trial.”

Rabinovitch earned her medical degree from McGill University in Canada in 1971. She completed her post-doctoral training in pediatrics at the University of Colorado Medical Center in Denver, and then was awarded a fellowship at Children’s Hospital Medical Center and Harvard Medical School in Boston.

She served as assistant professor of pediatrics at Harvard Medical School, and became the Robert M. Freedom Heart and Stroke Foundation of Ontario Professor of Pediatrics, Medicine, and Pathobiology and Laboratory Medicine at the University of Toronto, before heading to Stanford in 2002.

Other career highlights include:

“In her extraordinary 30-year career, Dr. Rabinovitch has made incredible contributions to our understanding of congenital and acquired pulmonary hypertension,” said Hugh O’Brodovich, M.D., the Adalyn Jay Physician-in-Chief at Packard Children’s and professor of pediatrics at the School of Medicine.

“She is recognized throughout the world of pediatric and adult cardiology as an amazing scientist, teacher, and clinician. Through the Amberson Lecture, she will no doubt bring great inspiration to current and future leaders in this field, and we are extremely proud to call her one or our own,” O’Brodovich said.